Prague is one of the most beautiful cities in Europe, and the Vltava River like a jade belt divides the city into two sections. There are numerous buildings of various historical periods and various styles in Prague.Castles and churches have their own characteristics. Of course, Prague’s square is also a unique place in the city.

The main sights of Prague are located in the city center, concentrated in the old town, new town and castle district as well as the small town, it is ideal for walking tours. The philosopher Nietzsche said: “When I want to use a word to express music, I found Vienna; and when I wanted to express mystery in one word, I only thinking of Prague. ” Let us discover the 10 most instagrammable spots in Prague which you can not miss.

The Charles Bridge, built in 1357, is the most artistic stone bridge in the 14th century and the most beautiful bridge in Prague across the Vltava River. The bridge has 1δ piers, at both ends are Prague Castle and the Old Town. There are 30 statues of saints on the Charles Bridge, all of which are masterpieces of Czech masters of Baroque art from the 17th to 18th centuries. They are called “European Open Baroque Art Museum” by Europeans. Now the original scriptures are kept in the museum, and most of them have been replaced with duplicates. The eighth statue of St. John on the right side of the bridge is the guardian of Charles Bridge. A golden cross is carved in the fence. This position is where St. John was dropped from the bridge. It is said that as long as you touch the Golden Cross with your heart, it will bring you a lifetime of happiness.

2.Take Photos With The Swans And Ducks Near Charles Bridge

After you have walked across Charles bridge, turn head right and get a shot with the swans and ducks at the edge of the river – you’ll see them as you’re crossing. They’re beautiful, go and create a few fairytale shots with them.

Prague Castle is located on the hills of the Vltava River in the Czech Republic and is the largest ancient castle in the world. The castle gathers the essence of art from various historical periods and is one of the most attractive tourist destinations in Prague. Since the establishment of the ninth century, the castle has been the seat of the Prague royal family. Over the centuries, after many expansions, it has not only retained many magnificent buildings and historical artifacts, but it is still the residence of the Czech president. Standing on the castle and looking out over the whole city of Prague, you can have a panoramic view. The castle has three courtyards, several old streets, galleries, gardens, and the larger Gothic church in the Czech Republic, St. Vitus Cathedral. The larger halls in the castle are the Spanish Hall and the Vladislav Hall. The Spanish Hall is the place where the President holds the honorary ceremony and state banquet. The Vladislav Hall is the place where the President holds the inauguration ceremony and other large political activities. In 1992, Prague Castle was selected for inclusion in the World Heritage List.

4.See The Top Of Prague From The Hotel U Prince Terrace Bar

Prague is such a stunning city but even more beautiful when you look up. When you are trying to find a spot to get a shot of the square and I think the Hotel U Prince terrace is the one of those spots. The terrace opens at 11am – get there as soon as it opens and try to get the little table at the edge of the rooftop.

Golden Lane is between St. George ’s Church and the Toy Museum. After turning into an alley, you can reach the golden lane lined with this cottage, just like a small house in a fairy tale. The place was later named because of the collection of many alchemists who were alchemists for the king, but after the 19th century, it gradually became a slum. It was re-planned in the middle of the 20th century and the original house was changed to a small shop. You can see different kinds of souvenirs and handicrafts, such as wooden toys on the 16th, tinned Prague soldiers on the 20th, and hand-painted clothes on the 21st. The appearance of the 19th is the most attractive.

Towards the end of old town is the Powder Tower (got its name as it used to store gun powder!) You can get an amazing view of the whole city from this tower. For some reason it’s relatively quiet so you can take as long as you like to enjoy the view.

Wenceslas Square is the center of commercial and cultural life in the New Town of Prague and has a history of 600 years. Wenceslas Square is not like a square, but more like an avenue. Its shape is an extremely narrow rectangle. There are many elegant classic buildings built at the beginning of the twentieth century on both sides of the street. Business district. Therefore, this square street has the reputation of Prague’s “Champs Elysees”. Wenceslas Square was one of the three major markets planned by Charles IV to establish the New Town of Prague. It is also the most important and busy trading and social center of Prague. However, with the evolution of history and social changes, this place gradually It has become a forum for people to express their dissatisfaction with social development. This square has witnessed many demonstrations and demonstrations by the Czech people against the government. It also records historical events in which the people defended the independence of the motherland and protested against aggression. Unique meaning.

A beautiful square, surrounded by beautiful buildings and plenty of cute little laneways. It houses a picture perfect Christmas market over the festive season and has plenty of vendors selling local food. Get there just before the sun rises to capture the Christmas lights and the huge Christmas tree there – you’ll have the place all to yourself.

Located in Prague Castle, St. Vitus Cathedral is a wonderful example of Gothic architecture. Among them are the tombs of many Bohemian kings. It is the largest and most important church in the Czech Republic. The cathedral is the place where the emperors of all dynasties held their coronation ceremonies. It is known as the “treasure of architecture”. Today, the collection contains the pure gold crown, golden balls and tokens of King Charles IV of the Bohemian Kings of the 14th century Holy Roman Empire. The top of the cathedral tower has a Renaissance-style clock. The bell tower is the most beautiful place overlooking Prague. Climb the 287 stairs in the church tower and climb up to look at the entire Prague city. When you breathe out When you finally reach the top of the tower, the breathtaking view of the hundred towers will make you feel truly worth the fare.

The dancing house was built in 1996. The shape of the house is full of curves and rhythms. The twisting and twisting twin towers are like two people embracing and dancing, so it is called “dancing house”-on the left is the “female dancer” with the appearance of a glass curtain “, The upper narrow and the lower wide look like a dance skirt, and the cylindrical shape on the right is a” male dancer “, so someone named the building as the famous double dancers Jin Ji Rogers and Fred Astaire. “Jin Ji and Fred”, the two buildings look like their dancing shadows.

Thank you so much for reading and happy exploring guys! (Don’t forget to put your phone down sometimes and just enjoy! 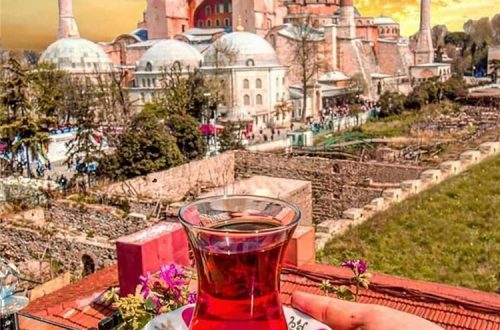 Why You Need To Visit Istanbul? Here Are The Answers!