Istanbul is the only city in the world that spans Asia and Europe. It used to be the capital of the three ancient empires-the Roman Empire, the Byzantine Empire, and the Ottoman Empire. As a result, its name changed several times. It was until Turkey moved to Ankara in 1923 that Istanbul officially became the city’s name.

Since ancient times, Istanbul has been known for its excellent location, rich historical sites, and fascinating fusion culture. The mosques, museums, churches, palaces, large buildings, small streets and lanes here, from the human landscape to the natural landscape, all these things really make people enjoy this old city. Let’s get together and enjoy this city’s famous spots.

Sultanahmet Camii (Blue Mosque) was built in 1609. The name of “Blue Mosque” is because the sun rays reflected by the Iznik tiles on its walls make the whole mosque appear blue.

An important part of the temple is the holy shrine. On the right side of the holy shrine there is a beautiful pulpit, where imam will preach on Friday afternoon and religious holidays. No matter how crowded the mosque is, anyone can see and hear the imam preaching.

There are two mosques in Turkey with six minarets, one of which is the Blue Mosque. When the number of minarets was revealed, Sudan was criticized as arrogant, because the mosque in Meccabarbai had six minarets at the time, and Sudan invested in the construction of the seventh minarets.

Hagia Sophia is now called Ayasofya Muzesi. Located opposite the Blue Mosque, with a history of nearly 1,500 years, it is the only building that has been changed from a temple to a church, a church to a mosque, and then a church.

The Hagia Sophia is the best example of the Byzantine architecture. Its interior is vast and the structure is complex. The main hall is covered with a central dome with a maximum diameter of 31.24 meters and a height of 55.6 meters. It has appeared numerous times in the lens or movie screens of tourists around the world. The continuous arcade under the dome makes the dome seem to be weightless, and the 40 arched windows below it introduce light to make the interior appear fascinating.

Mosaic (mosaics) murals are even more not to be missed. These mosaics depict the Virgin Mary, Jesus, saints, emperors and queens, as well as other purely decorative geometric mosaics, which are quite gorgeously arranged.

Also known as the Old Royal Palace, it is at the junction of the Bosphorus Strait and the Golden Horn and the Marmara Sea. It was the place where national ceremonies and royal entertainments were held in the past.

The Royal Palace is composed of four courtyards and other small buildings such as a harem, which used to be inhabited by about 4,000 people. From the 15th to the 19th century, it was the center of the Ottoman Empire. On April 3, 1924, the Topkapi Palace became a museum of the Empire era under government decree.

The large number of buildings and halls in the palace are currently only the most important parts open to the public. The palace is a masterpiece of Ottoman architecture, with a large number of porcelains, official uniforms, weapons, shields, armor, Ottoman miniatures, Islamic calligraphic manuscripts, murals, and Ottoman bead objects.

In addition to the fascinating stories behind the Harem, Chinese travellers should not miss the Chinese ceramics displayed in the Royal Hall. Their exquisite craftsmanship has reached an astonishing level; the Sultan ’s royal kitchen is also worth watching.

The bridge was originally constructed of wood, and then turned from stone to concrete. “Whenever you stand here and look at Istanbul, and cars drive past you, you will feel like a king.” The city Mustafa Kemal, the builder of and the most famous representative of modern Turkey, once described this bridge.

The bridge is regarded as a representative building in Istanbul, and the fishing rods on the bridge constitute a new landscape. Especially on weekends, the scene is spectacular.

The Basilica Palace (Yerebatan Sarnici), located diagonally opposite the Hagia Sophia, was built in 532 AD and was an underground reservoir from the Byzantine period to the Ottoman period.

There are still fish cruising here. Inside the palace were two inverted Medussa (Greek mythology snakehead hairhead) head stone carvings, which were excavated in 1984 from a silt with a thickness of 2 meters at the bottom.

In fact, the new mosque is really not “new”, it has more than 400 years of history. In terms of layout, the Yeni (meaning “new”) mosque is similar to the Blue Mosque and Suleymaniye Mosque. The interior decoration is quite gorgeous, with gold decorations and colorful Iznik tiles, as well as exquisite marble carvings.

Emirgan means “artificial forest” in Turkish, and the tulips here are the biggest highlight that attracts visitors’ attention. Tulips are the national flower of Turkey, and the park hosts the Tulip Flower Festival every year.

Many cafes in the park are converted from old buildings from the previous Empire period. The cute squirrel has no fear of people. Here is a place to enjoy nature.

Dolmabahce Palace was built in the middle of the 19th century and is also called “New Palace”. Located on the European coast of the Bosphorus, the building complex stretches 600 meters along the strait and occupies an area of 15,000 square meters. It has 285 rooms and 43 halls.

What you need to see at Domabahce Palace is famous paintings distributed in the hall and various rooms. The harem architecture of the new palace is more stylish and luxurious than the old palace. The bathroom and toilet are all inlaid with white marble, and all doors and windows are carved with high-quality wood.

The guards at the gates of the palace are also the highlights of tourists. They are so powerful and immovable that many people think they are statues.

Taksim Square is the heart of modern Istanbul. Its name is derived from the reservoir (Taksim) on the west side of the square. There is the busiest commercial street in Istanbul and the shortest subway in the world. The Republic Monument (Cumhuriyet Aniti) on the square was built in 1928 to commemorate the establishment of the Republic of Turkey.

Taksim Square is the main transportation hub. Independence Street is connected to the square. Nostalgic trams run along the street from the square and end near Dunel (1875, the second oldest subway line after the London Underground).

Prince Island is not actually an island. It includes nine islands, five of which are currently open. The most attractive is the largest island-Büyükada Island. These islands were once the places where the Byzantine princes were exiled. Beautiful beaches, shaded green trees, and villas are piled up one after another, both locals and foreign tourists alike. Transportation on the island is quite environmentally friendly: all types of motor vehicles are prohibited. Of course, the most casual is to take a horse-drawn carriage (fayton), which is equivalent to a local taxi. To reach Prince Island, if you are leaving from the European area, you can depart from Kabataş terminal, and the Asian area is the closest from Bostancı terminal (also Kadıköy terminal, Maltepe terminal and Kartal terminal), and it will arrive in about 45 minutes. 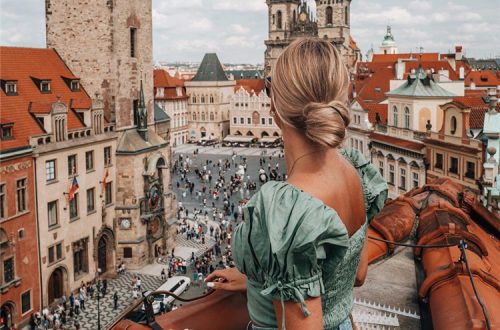 10 Most Instagrammable Spots In Prague You Can’t Miss